With health scares running rampant it can be difficult to decide what exactly is safe to eat these days, and what isn’t. After some careful study, we’ve come up with a list of organic and non-organic foods that you may want to avoid or wash well, what’s acceptable, what’s totally safe and how you can avoid some health problems with the foods you may not be willing to give up.

Let’s start with an overhead view of what makes certain products a little less safe to eat than others. Non-organic foods are typically food items (ie fruits, veggies and meats) that have been genetically altered, or treated to resist certain diseases, pests and other complications typically found when growing the plants or raising the animals. There’s been a rising concern regarding this practice as we aren’t sure what possible repercussions may arise from said actions, and as a result people are turning to organic foods – so foodstuffs that are ‘all natural’.

Some of the more commonly treated foods are fruit and vegetables, as they’re sprayed with pesticides to dissuade bugs from eating or infecting crops that are out in the open field. Commonly sprayed produces include corn, beans, wheat, berries (strawberries, blueberries and the like) and tree based fruits (apples, oranges, bananas, etc). Some are more affected than others and hold a higher risk of containing ‘pesticide residue’, which you could be ingesting when you eat them. Naturally, washing these foods before you eat them dramatically decreases that risk, but we can never be too careful. Fruit and vegetables grown with husks are much less susceptible as they have that barrier between the sprayed on pesticides and the edible bits. Here’s a short comparative list just to help you get the idea, and save you some time and possible stress.

Fruit and Vegetables to Wash:

Think of it this way, if you can eat the skin, you should wash it. If you can remove the skin/husk/shell, you’re good. Now obviously organic food isn’t limited to just fruits and vegetables, as there are also ways to ‘enhance’ meat by-products as well. Large corporation farmers have been known to give their animals hormones or antibiotics to enhance certain aspects of the animal or to give it resistances to illnesses. The concern rises, however, when thought is given to the concept of ‘how does that affect me when I take it into my body?’. As there have been raised suspicions regarding a link between ‘non-organic’ meat and human illnesses, such as certain types of cancer, thyroid diseases, obesity, diabetes, endometriosis, uterine fibroids, infertility, asthma and allergies; people generally find themselves more inclined to lean towards ‘organic’ meat. 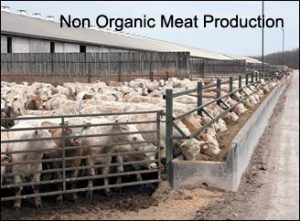 When we talk about organic meats we’re referencing animals that are grain fed with products that haven’t been sprayed with pesticides and whatnot (similar to our own organic fruits and vegetables), or are allowed to graze in open pastures, similar to how they were back before modification and pest control. These animals aren’t given hormones to enhance meat or product production, and their byproducts are labeled clearly in food markets. They are a little more expensive, as raising animals in this way is a little more costly, but the meat cuts are typically labeled as ‘pasteurized’ or ‘grain fed’. You can also try tracking down some local farmers, and talk to them about purchasing from them directly; small hobby farmers are usually your best bet. 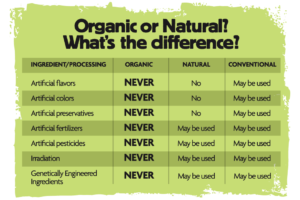 Looking at the differences as far as nutrition is concerned, the two are more or less identical. There’s been some yet-to-be-proven theories about organic foods offering more nutrients than inorganic foods; or how pesticides, hormones and the like effect the natural bacteria within our digestive systems, but as of yet, there hasn’t been concrete evidence supporting either bias. This is largely due to the fact that these practices haven’t been used long enough, or we haven’t had a large enough time span to fully pinpoint or study specific side-effects and/or benefits from either side, but we’re coming close.

In short and to wrap up the topic, watch what you put in your cart while you shop, if you’re concerned with possibly ingesting pesticides or hormones that could cause some partially linked illnesses and diseases. Organic foods are clearly labeled in stores, and can be more expensive, whereas non-organic foods are less expensive and don’t offer clear labels. You can, however, wash the fruits and vegetables you’d eat ‘whole’, or remove the husks/skins of said products that could have been treated with a minimized risk. Be well, and be vigilant.